Bill Thompson is a sound and video artist currently living in the UK. His work involves the combination of found objects, field recordings, repurposed live electronics, and digital media to create evolving structures for installation and live performance.

He has earned numerous awards and commissions including the PRS for New Music ATOM award, the GAVAA visual arts award, a PRS for New Music Three Festival commission, the 2010 Aberdeen Visual Arts Award, and was nominated for the Paul Hamlyn Award in 2012.

As a sound artist, Thompson creates immersive environments that slowly shift and evolve over time and that focus listeners’ attention on the act of perception as much as on the work itself. His installations have been shown across the UK and abroad with his most recent being A Knowing Space premiering in London at Union Chapel in 2016, and later 2017.

Similarly, as a performer and improviser, he works primarily with Moog guitar and electronics to create immersive pieces that bring awareness to perception and presence through close listening. His compositions often involve long sustained tones, slowly evolving textures, and indeterminate or improvised structures.

In addition to his solo work, Thompson has collaborated with choreographer Ian Spink for several years in the performance company Airfield. He has also worked with several well-known artists including Keith Rowe, Faust, EXAUDI and others. 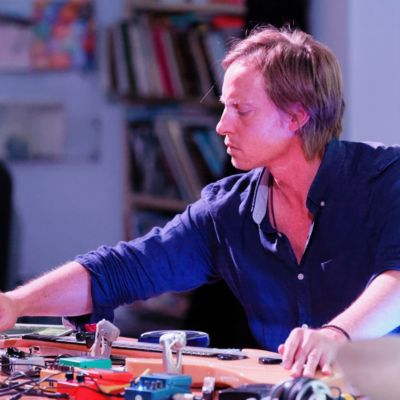