by Zinnie Harris (writer and director) and John Harris (composer)

Set at a time when humanity has run out of resources, John and Zinnie Harris’ The Garden tells a dystopian tale of a couple at the end of their tether. Living on the 10th floor of a “high-rise block” they discover hope in the form of a strange tree growing through the floor of their kitchen.

Based on an original short play of the same name by Zinnie Harris, commissioned by the Traverse Theatre in 2009 and winning a Scotsman Fringe First Award, this new operatic version was commissioned by soundfestival and premiered in Aberdeen in 2012. In 2015, The Garden was selected for the prestigious Made in Scotland showcase and was part of the Traverse Theatre’s Edinburgh Festival Fringe programme. Most recently, in June 2016, The Garden had performances at Xintiandi Festival in Shanghai, China.

The Garden is open to touring opportunities. Please see the Promoter information and tech spec below for more information.

The acting and vocals are directed so intensively by Zinnie Harris that this opera, with its two actors, can compete with the best of British or Northern European contemporary cinema. - Berliner Zeitung, August 2013

It’s a very bleak play that somehow left me feeling incredibly uplifted. But also what I liked about it is this idea of trying new forms of opera because opera is notoriously expensive, notoriously overblown at points and to see this (“The Garden”) in this tiny tiny studio theatre made me think that there’s great futures ahead for opera. - Louise Welsh on Saturday Review, BBC Radio 4, August 2015

Small-scale new opera is seen too rarely in Scotland. This piece – which is short…and convincingly designed…and in which the composer plays his own subtly effective music – is a powerful advert, both for the art form and for the show's producer, sound. - Mark Brown, Sunday Herald, August 2015

The Guardian *** star review: The Garden

All Edinburgh Theatre **** review: The Garden 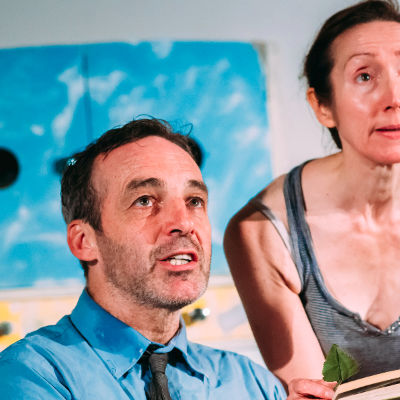 Review of “The Garden” in the Berliner Zeitung

“The Garden” to go on tour!

Press Release: sound thinks ‘out of the box’