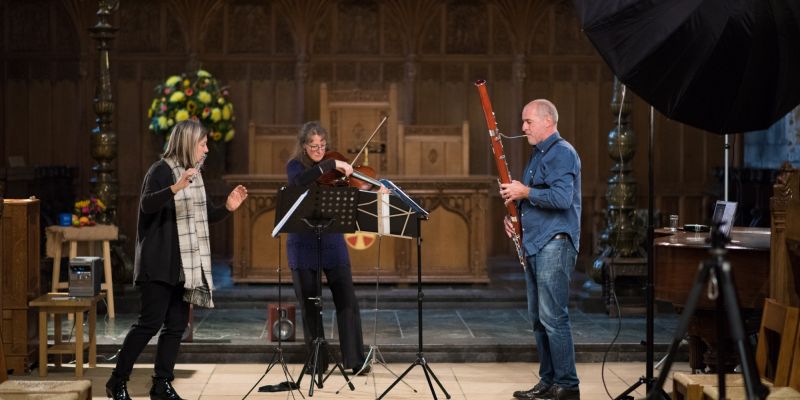 Nordic Viola was formed in 2016 during RSNO violist Katherine Wren’s journey around the North Atlantic. Inspired by the extreme seasonality of the north, this afternoon’s programme takes you on a tour of the Faroes, Greenland, Iceland and Shetland.

soundconversation with composer Anna Appleby and the musicians after the performance.

Faroese composer Kári Bæk’s interest in composition sprang from his work as a conductor. His works include pieces for solo violin, solo flute and string quartet, the musical story “Veiða Vind” (Hunt Wind) for symphony orchestra and narrator, and “Earth” for choir and chamber orchestra, which was commissioned for the Nordic House on the Faroes’ 25th Anniversary. Kári was nominated for the Nordic Council Music Prize in 2012 and in 2014 he received a 12-month artistic bursary from the Faroese Culture Fund.

Kári is a member and former chair of the society for Faroese Composers http://www.composers.fo/histor...

“Vár Trio” means “Spring Trio” in Faroese but can also mean “Our Trio”. This play on words is a friendly reference to the trio’s dedicatees, Faroese musicians Angelika Nielsen (viola), Andrea Heindriksdóttir (flute) and Christina Andersen (bassoon), and the initials of their names and instruments are incorporated into the musical material.

The Trio opens haltingly, like the islands awakening from a long winter, but the music becomes gradually more animated and polyphonic, building to a final exuberant waltz and a bright, triumphant D major chord as winter is banished.

Drrrunnn for Viola and Birds
Kristian Blak (b.1947)

Born in the Danish peninsula of Jutland in 1947, Kristian relocated to the Faroe Islands in 1974, where he's lived ever since, and where he's written most of his works.

Having made numerous recordings as a performer, Kristian has also toured the globe widely with his own jazz and folk music ensembles.

In addition to this, Kristian works as manager and CEO of the Tutl Records label and is artistic director of the popular Summartónar festival.

Kristian Blak is widely regarded as one of the most prominent and important figures of Faroese music history, playing a central role in the musical life and culture of the islands.

“Drunn” is the Faroese word for the storm petrel and the Faroese island Nólsoy is home to the world’s largest colony of these birds. The electronic soundtrack for “Drrrunnn” was recorded in the islands during summer and, as well as the petrels, features kittiwakes, puffins, gannets, fulmars and snipe. The partially improvised viola part variously imitates, comments on and engages in dialogue with the birds.

Aside from a few private lessons with the distinguished Danish composer Ib Nørholm, Poul Ruders undertook little formal training in composition. Finding his voice has taken him longer than many other composers, and the pursuit of new styles and devices has led Ruders in all manner of directions, metaphorically and literally.

Ruders’ international breakthrough came with “Concerto in Pieces” (1994-95) - a modern response to the educational demands that created Britten’s “Young Person’s Guide to the Orchestra”. It was commissioned by the BBC Symphony Orchestra and premiered at the 1996 Last Night of the Proms. Ruders has completed several operatic commissions perhaps most notably an adaption of Franz Kafka’s masterpiece of alienation and existential guilt, Kafka’s Trial (2001-03).

Ruders’ Viola Concerto from 1994 has an almost Late Romantic expressive style (Ruders is a self-confessed admirer of Richard Strauss).  The composer himself described it as “a tribute to inwardness, patience and beauty”, qualities that could just as easily be applied to many of the six movements of his “Autumn Collection” for solo viola, written twenty years later in 2014. The Prelude, however, is a lively, rhythmic movement written in two parts throughout and owes something of its style to Danish fiddle music.

Anna Appleby (born in Newcastle upon Tyne, 1993) is a Manchester-based composer. She has written for everyone from opera singers to primary school children to amateur choirs to world-leading orchestras, including the Royal Northern Sinfonia, the Royal Scottish National Orchestra and the orchestra of Dutch National Ballet, and has had her music showcased abroad and on BBC Radio 3. She has worked extensively with community music groups, including Streetwise Opera, with whom she appeared in US Documentary 'Turning Point'. She was the 2016/17 Music Fellow with Rambert Dance Company, and has premiered works with choreographers at the Southbank Centre, the National Theatre River Stage, Ignition Dance Festival and RADA Studios. She continues to work collaboratively with choreographers and musicians.

Hrakningar is a joint commission from Nordic Viola and Sound Scotland and receives its premiere this afternoon. Hrakningar is an Icelandic word used to describe being buffeted by a storm or wind, blown somewhere against your will, and is also used to refer to dangerous events that happen to a person.
Hrakningar juxtaposes the freedom of migrating birds with the prejudice that refugees face when seeking a better life. The piece incorporates calls from the species of geese that travel between Iceland and Scotland as part of their yearly cycle, including Pink-Footed Geese, Brant (or Brent) Geese and Greylag Geese. They arrive in Scotland in Autumn and leave for Iceland in Spring each year. Geese face harsh conditions when travelling but their journeys are accepted and often celebrated while humans are expected to conform to imposed boundaries and borders.

Lillie Harris graduated with a First Class BMus degree from the Royal College of Music in July 2016, studying with Haris Kittos and winning the Elgar Memorial Prize for her final portfolio. Musical from a young age, her interest in composing grew out of learning various instruments, a flair for languages, and a lot of creative writing. To this day, words, narrative ideas, and complex emotions are still a huge source of musical inspiration for her and often form the backbone of her work. Lillie’s pieces have been performed and workshopped by ensembles including Psappha, Florilegium, the Assembly Project, Fretwork, the RSNO, the Gaudier Ensemble, and Ensemble Recherche, and performed at the Southbank Centre, Science Museum, King’s Place, Usher Hall Edinburgh, and Glasgow Royal Concert Hall.
She was awarded the Tenso Young Composers Award (2017) for her song cycle of poems by August Stramm, her piece ‘Dormientes Bestia' for paetzold and tape was in the winning programme in the RCM Contemporary Competition 2016 and has been played on BBC Radio 3, and she was selected for the NCEM’s Composer Competition Final in 2013 and 2014, and the International Antonin Dvorak Composition Competition 2016. She was selected for the first RSNO’s Composers Hub 2015-2016, from which her orchestral work ‘remiscipate’ was chosen to be performed in their Season Finale concerts. This year (’17-’18) she participated in both the LPO Leverhulme Young Composers programme with Sir James MacMillan, and the LSO Soundhub scheme, for which she developed an interactive electroacoustic setting of Robert Browning’s ‘My Last Duchess’.

“AND” was commissioned by Nordic Viola in 2016 and premiered in Shetland.

“AND” was inspired by Jen Hadfield’s poem, “Blashey-Wadder.” In the composer’s words: punctuating the deceptively calm and flowing lines of Hadfield’s poem describing a huge storm is the word ‘And’: every verse after the first starts with it. Combined with her use of the word ‘addictedly’ in the fourth stanza, it made me think of the repetitive feeling of wind and rain - and how, when you’re stuck in it, it feels like a constant, draining stream of ‘and

then…’ This piece is an exploration of that relentlessness, the rising plumes of wind-whipped

water, and the awe-inspiring power of elemental forces on any scale - even on a solo viola.”

Arnannguaq Gerstrøm is a flautist, conductor, and a composer. She was born in 1977 and grew up in Ilulissat and Nuuk, Greenland. From 1996 she studied in Denmark, Sweden, and England and achieved a Master of Fine Arts in 2004 with a major in the flute. Alongside her studies, Arnannguaq attended master courses in Sweden, Denmark, Austria, France, and England.

After her debut, Arnannguaq moved back to Greenland and has since given a countless number of concerts in Greenland, the Faroe Islands, Iceland, and Denmark. She is part of El Sistema Greenland, and was appointed the Cultural Ambassador of Kommuneqarfik Sermersooq in 2013. In 2014, she was admitted to the art network Far North as a composer. In 2014 she formed Erinniat Ensemble, which has the goal of constructing newly written  music. Arnannguaq has composed music for orchestras, ensembles, voice and choirs, and has written solo pieces for the flute. In July 2016, three of her works were premiered in Tivoli Koncertsal in Copenhagen, and in 2016 one of her works were performed in Harpa in Reykjavik during the Nordic Music Days.

“Ukioq” means “Winter” in the Inuit language. This trio for flute, viola and bassoon is inspired by the spirit, nature and forces of the winter in the Arctic surroundings of Greenland. Commissioned in 2016, Ukioq is dedicated to the Nordic Viola Project and was first performed in Dunblane Cathedral and the RSNO Chamber Series in winter 2017-18.

Fragment for Flute, Viola and Bassoon
Kári Bæk (b.1950)

Fragment was originally composed in 2010 for flute, clarinet and bassoon. The clarinet part was arranged for viola with the composer’s permission.

Whilst not specifically programmatic, the composer describes the outer sections of “Fragment” as reminiscent of life in Tórshavn, the bustling capital of the Faroes. The quieter central sections, which require the flautist and bassoonist to switch to the triangle, depict the quietness and brilliance of a starlit night away from the urban hub.

The University of Aberdeen Development Trust