Katherine Wren (Viola) is from South Yorkshire and studied music at the University of Manchester and the Royal Northern College of Music. She is a member of the RSNO where, alongside orchestral playing, she has a passion for audience engagement. In 2017 she gave a presentation at Aberdeen University’s “Sounding the North” conference as part of Sound Festival. She has also been closely involved with the RSNO’s “Composer’s Hub” which has led to commissions for Nordic Viola. She teaches in Dunblane and for RCS Musicworks in Stirling. Since completing her MA in Translation Studies, she has also worked as a freelance translator and writer. From September ’16 until March ’17, she travelled to the Faroes, Iceland, Shetland and Greenland, working with musicians from the North Atlantic region as well as sharing music with young people.

Helen Brew(Flute) comes from Chandler’s Ford in Hampshire. She studied flute at the Royal Northern College of Music with Trevor Wye and Clare Southworth. She was a member of the European Community Youth Orchestra. Memorable performances included Schoenberg’s Gurrelieder in the Berlin Philharmonie with Jessye Norman, conducted by Claudio Abbado. She is currently a member of the RSNO. Education and Outreach work is very important to Helen and especially dear to her heart is working with children in hospices. She also teaches at the Royal Conservatoire of Scotland.

David Hubbard (Bassoon) grew up in Wiltshire and went on to study music at the Royal College of Music in London, graduating in the summer of 1990. He then went on to work in Spain where he lived for 12 years, working initially for the Orquesta Filharmonica de Malaga, and later, the Real Orquesta Sinfonica de Sevilla. David Hubbard took up the position of Principal Bassoon of the Royal Scottish National Orchestra in July 2004 and he is a regular participant in the RSNO chamber music series. He has also performed as a soloist with the RSNO on several occasions. David has guested as principal bassoon with many of the British orchestras. David is tutor of bassoon at the Royal Conservatoire of Scotland, and at the Douglas Academy. He regularly coaches the bassoons for the National Youth Orchestra of Scotland and has given masterclasses at many UK music schools.

Nordic Viola has performed in Tórshavn (Faroes), Seyðisfjörður (Iceland), Baltasound and Lerwick (Shetland) as well as venues throughout Scotland. In November 2017 they played at a reception in the Scottish Parliament for the Arctic Circle Conference and in January they performed in the RSNO Chamber Series.

Education and outreach are a key part of our work. Masterclasses and creative workshops have taken place in music schools in Iceland, Faroes, Greenland and Shetland and in conjunction with Dunblane Cathedral Arts Guild. 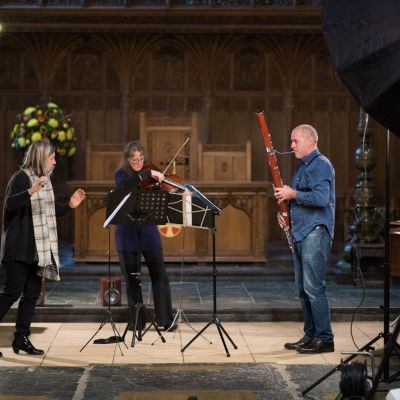