Silent Chaos (Marta NoOne: modular synth, vocals, FX, laptop and video programming - Ugo Vantini: electronic and acoustic drums and percussions, loops, samplers, field recordings manipulation, graphics) is an experimental audiovisual project founded in Rome, IT, in 2016. Their music nourishes of non-linear time, of conceptual and performing circularity: ancient and futuristic sounds advance in a spiral-shaped way. Their sound is structured but not predictable, in an impromptu composition based on channeling through improvisation. Past, present, and future times mash up in ancient sonorities and electronic twistings.

They have released their debut album “micro” through Eclectic Productions in 2017 and were featured in four international compilations; the second album “Osclltr 012” was released in 2018 through Berlin’s label Osclltr Records.

Silent Chaos did sonorizations for various art exhibitions, they acted in theatrical and radio performances, and have performed, with their audiovisual show, at the Italian contemporary art museum MAAM and in various other venues between Italy and UK. Currently based in the northeast of Scotland, Silent Chaos have presented their composition “Schizophrenia in Schizophonia” in a live performance at the SERG Sonic Realities International Postgraduate Research Conference 2018 in Aberdeen and have performed at the King’s College Chapel for The University of Aberdeen Music Department, where Marta is currently taking a Master in Sonic Arts; they have performed the A/V site- specific work “Permutations” at the Kirk of St Nicholas in Aberdeen, on 30 November 2018 for sonADA inTransit III; they have performed at the Glasgow’s CCA for Cryptic Nights, for the 25th anniversary of Cryptic Glasgow and the 10th anniversary of Cryptic Nights, on March 2019 with the A/V project “Origins”; they’ve also performed it at Anatomy Rooms in Aberdeen for Listen Again Festival 2019, the fringe of Look Again Festival. “Origins” radio edit has been broadcasted for Radiophrenia 2019. They have performed for WAGON in the Japanese Garden of Duthie Park “The secret music of plants”, an electroacoustic performance which involves a plant
connected to the modular synthesizer with biofeedback sensors, so it’s the plant that is generating music through the synthesizer.

Marta NoOne is an Italian musician and visual artist engaged in an aesthetic-philosophical research that uses sounds and images to filter through her art the historical moment and the related distress, drawing from other possible etheric worlds. In this path she organized unconventional events of electronic music and contemporary art, as the electronic music festival “Electric Cirkus” in Rome (Electric Cirkus: https://electricirkus.wixsite.... electricirkus), featuring more than 30 artists and more than 2000 people of audience; she has collaborated with several artists of the Rome area in live and theatrical performances and she has produced original soundtracks for independent short films.

She is now fully engaged with her A/V experimental project Silent Chaos, experimenting with generative graphics and softwares, as Processing and TouchDesigner. She has a Sound Engineering diploma and an Ableton Live Producer diploma. This year she’s taking a Master in Sonic Arts at the University of Aberdeen, with high marks. She also works as sound engineer, both live and studio, and she worked for composers as Pippa Murphy and for Sound Festival.

Ugo Vantini, eclectic drummer, musician and producer of Rome, Italy, he played with many groups of progressive rock extraction such as: Divae, Balletto Di Bronzo, Ezra Winston, VU Meters. He shared the stage with artists of the caliber of B.M.S., Orme, Osanna, Gary Green (Gentle Giant), Jack Bruce, Area, Arena, Anekdoten, Carl Palmer (E.L.&P.) and many others. He worked with Entropia, a historic Italian band that offers electronic music contaminated by influences of various kinds, with Entropia Techno Department, the side project of Entropia exclusively oriented to techno, and with the label Eclectic Productions, producing albums and art-covers. With Eclectic Productions he produced the electronic music festival Calcatronica (http://www.eclectic.it/calcatronica-2015/), featuring more than 30 artists. He is now fully engaged with the A/V experimental project Silent Chaos. 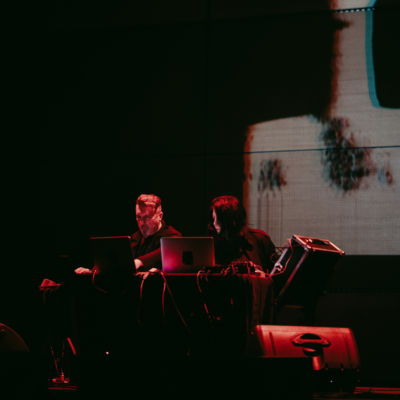