Roger B. Williams is the Master of Chapel and Ceremonial Music and Organist to the University of Aberdeen. Born in Swansea, he received his first musical education at Huddersfield School of Music (now part of the University) before graduating B Mus. Hons from Cardiff University.

After researching the early works of Arnold Schoenberg at King’s College Cambridge, he had a freelance career in London as an organist, harpsichordist, conductor, composer and singer. For five years he was Chorus Master to the Scottish National Orchestra. His researches into collections of music at country houses and castles in the North East have yielded many CDs and a performance for the late Queen Elizabeth the Queen Mother.

He has several made CDs by Chandos, Hyperion, Alpha, Top Note, and Cantoris Records. Recent recitals have been at King’s College Cambridge, Durham and Guildford Cathedrals. He was awarded MBE in 2009 for his services to music and an honorary D Mus. from the University of Aberdeen in 2011. 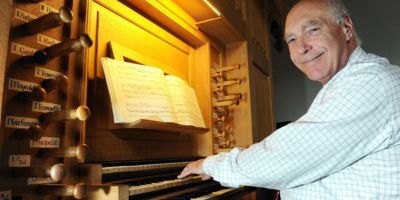