Alice Allen is from Banchory and works with many of Scotland’s leading performing groups including the BBC Scottish symphony Orchestra, Scottish Ensemble, London Concertante, Concerto Caledonia, Scottish Chamber Orchestra and the Brodick Quartet. Alongside this she has played traditional scottish music on cello from a young age having studied with leading instrumentalist Natalie Haas. Alice has recorded with many leading folk artists including former BBC young traditional musician of the year Robyn Stapleton and MG ALBA Scots Singer of the year Iona Fyfe. She teaches Scottish Cello at the Royal Conservatoire of Scotland.

This year Alice records her debut album with Nyckelharpa player Gabi Maas, and continues her work with duo partner fiddler Alistair Savage. Alice is one half of violin / cello duo GAIA, who were awarded the EMS 2019-21 ensemble in residence.

Katrina Lee is a violinist from Yorkshire, who began studying at the Kirklees Music School with Ralph Barker under the generous sponsorship of Stephen Bell. After winning numerous prizes in local competitions, Katrina decided to pursue a career in music and in 2010 received a scholarship to study at the Royal Conservatoire of Scotland; graduating with first class honours in 2014 and masters of music in 2016 under the tutelage of Andrea Gajic.

In 2017, Katrina was appointed the Principal 2nd Violin position with the orchestra of Scottish Ballet and has enjoyed learning all of the rich ballet repertoire including Swan Lake, Nutcracker and most recently Prokofiev’s enchanting ‘Cinderella’. As well as Scottish Ballet, Katrina works regularly with the BBC Scottish Symphony Orchestra, Scottish Chamber Orchestra and has performed with orchestras all around the UK including the Royal Liverpool Philharmonic, BBC Philharmonic, BBC symphony, Northern Sinfonia and the London Philharmonic Orchestra.

As well as orchestral playing, Katrina loves chamber music and is in the Brodick String Quartet and the Escocia duo, a Violin and Classical Guitar duo. Her playing work has taken her to lots of countries including most recent the Lincoln Centre in New York. Other places include China, South America, Hong Kong, Canada, Iceland, Italy and Prague. Katrina plays on a modern violin (2003) based on a Guaneri del Gesu by Andrew Fairfax and a bow (1955) by Louis Henri Gillet. 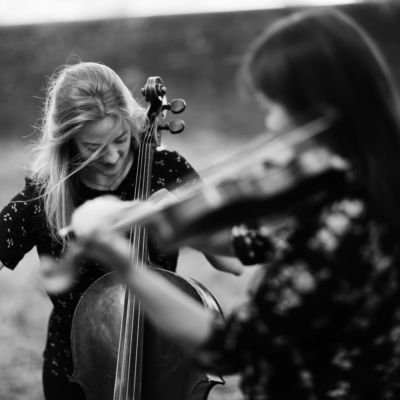