With its dynamic approach to contemporary music Ensemble Klang has, since 2003, been bringing its sonic adventures to ever-growing audiences. Its unique yet versatile instrumentation – saxophones, trombone, keyboards, percussion, guitar, electronics – has attracted some of the most exciting composers working today, including Heiner Goebbels, Julia Wolfe, Peter Adriaansz, Kate Moore and Tom Johnson. Performing without a conductor, the result in concert is one where complex music requiring virtuosic accuracy and precision is played with the energy, drive and passion of a band. Both live performances and recordings have received critical acclaim: ‘Scintillating’ Het Parool; ‘wonderful textures: an ever-changing mix of the notated and the improvised [with] exotic and newly designed instruments’ The Guardian; ‘Ensemble Klang's playing is intimidatingly good, beautiful and honest’ de Trouw; ‘Pure, uncompromising and relentless... Ensemble Klang play everything with an equal amount of precision as intensity and honesty’ 5-star review, NRC Handelsblad. Performances across Europe and the United States have established the group at the forefront of 21st century concert music – their performance of Fausto Romitelli being chosen in the top five concerts of 2016 by the Dutch national newspaper NRC. Stichting Ensemble Klang is financially supported by the City of The Hague. 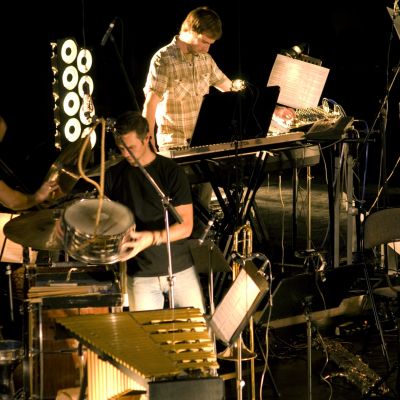