She was selected by the Centre d’Art Lyrique de la Méditerranée, where she perfected her voice. She sang Malher’s Knaben Wunderhorn at the Festival of Young Artists in Bayreuth, having a particular fondness for the German repertoire.

She combines the instrumental and vocal aspects of her career (double bass player and singer) into original projects. She composes and acts on stage in Quelque Part au Cœur de la Forêt (directed by Claude Buchvald, Parcours Jeunesse Théâtre de la Ville)… She is also very active on the jazz and improvised music scene, working with artists such as Médéric Collignon, Louis Sclavis, Bruno Chevillon and Joëlle Léandre. In 2018, she was the artistic director of TREPAK, presenting her poetic opera, Comment s’en Sortir sans
Sortir, at Vanves theatre, L’Echangeur theatre in Bagnolet and the Hexagone in Meylan, Pain Maudit, her next project, will be created on 13 December 2019, at Vanves theatre. 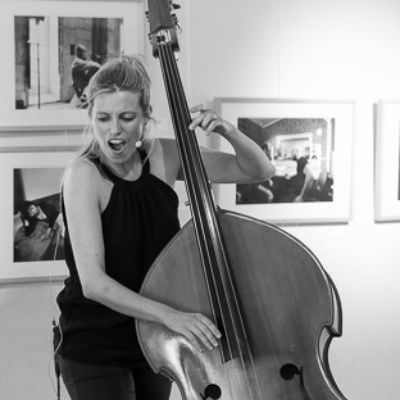