Go Compose 2015 took place 11th-13th October at Woodend Barn, Banchory. With the help from professional composers Oliver Searle and Usui Shiori, young composers created their own, original piece of music. The course finishes finished with a fantastic performance from the players of Red Note, with 11 new pieces being aired for the first time. Each of the composers introduced their own works, as well as producing a short programme note about the pieces, explaining how they had got to the point of completion over the last few days.
Note: We've received permission from the authors to upload the sound files in this playlist. More files to follow as permission requests are approved.

My piece is called The Last Journey because after I wrote it I thought it sounded like a journey when it was played back. The fast parts also sound like you’re excited on your way home while the slow parts sound like you’re tired.

The composition you will hear this evening is called The Challenging Piece. This piece has very difficult arpeggio scales which are played throughout hence its name. I hope you enjoy it.

A Memoir to Remember - Adekemi Goke-Dabiri

My piece A Memoir to Remember is a 2-3 minute melodic and tranquil piece. It was originally called Coming Home to commemorate loved ones coming home, but while I was putting the finishing touches to it, it reminded me of the memories that I’ve shared with everyone around. Hopefully you feel the same way.

My piece is called Background Radiation because of this year’s Go Compose theme of space. To fit this theme, I have included many diminished sevenths and weird chords. There is also a large range of dynamics to represent passing stars, planets and galaxies. Hope you enjoy.

I wrote this piece as I wanted to see if I could use some ideas from one of my piano solos and transfer it into this trio. I gave the piece its name Cantando, which is Italian for ‘singing’, as I feel the instruments sing out their melodies throughout the piece.

My piece is called Apollo. It is based on the dangers and beauties in space that are faced in space missions. This is shown in the contrasts in the piece.

A Range of Themes from the Solar System - Clara-Jane Maunder

I was inspired to write this piece after a very informative and interesting presentation by the Aberdeen Astronomical Society. I was amazed by the vastness of our universe and the variation in planets, stars, galaxies and constellations that surround our tiny world. I hope you enjoy my piece. 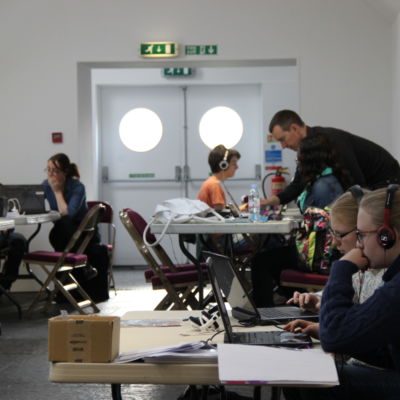